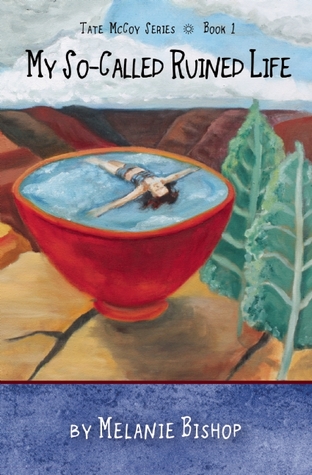 I can count on one hand the number of times I have cried while reading a book. 1) Harry Potter and the Deathly Hallows (the realization that is was over was devestating to me) 2) Wonder…bullying at it’s finest…or worst, however you look at it 3) The One and Only Ivan (being an animal lover this one did me in) and now 4) My So-Called Ruined Life…this was not something I was expecting this morning, on the bus no less. I picked up this book because it popped up on Gooodreads and had fantastic reviews. I was lucky enough that it was actually on the shelf at my branch and I was immediatley hooked.
Tate McCoy has a bucket list of sorts. It is meant to be short term however meeting “Swimmer Boy” “Boy who Saws”–aka Sawyer–throws a wrench in her plan. Tate is surrounded by extended family. Her aunt on her mom’s side, her uncle from her dad’s side and many more. Being surrounded by so much love would be recognized as a blessing by many. However in Tate’s situation it is tragic. Her recovering alcoholic mother was murdered (they were estranged but working towards reconcilliation) and her father is in prison accused of this horrific crime. Fortunately Tate has her best friend Leafy Green aka Kale to help her through her “so called ruined life”.
According to Goodreads, this is a triology. I would love to follow along on Tate’s journey however this installment wrapped up so nicely I don’t feel like I am missing out on anything.

I received this as an ARC from Netgalley and the publisher (Thank you:-).  I liked this book a lot.  It is written from 2 different perspectives from the same person–Elanor.  Elanor and her family are moving to a new town and Elanor is hopeful for a fresh start.  However, a tragic car accident changes all of that and open a world to the “in-between”.  Elanor meets Madeline and soon thinks of her as her only friend.  Madeline is beautiful, adventurous, smart and funny–everything that Elanor is not.
There are plenty of twists and turns in this book which kept me wanting to read more and more.  There is typical teenage angst but then moments of pure love between family members.  I will be recommending it when it is published.